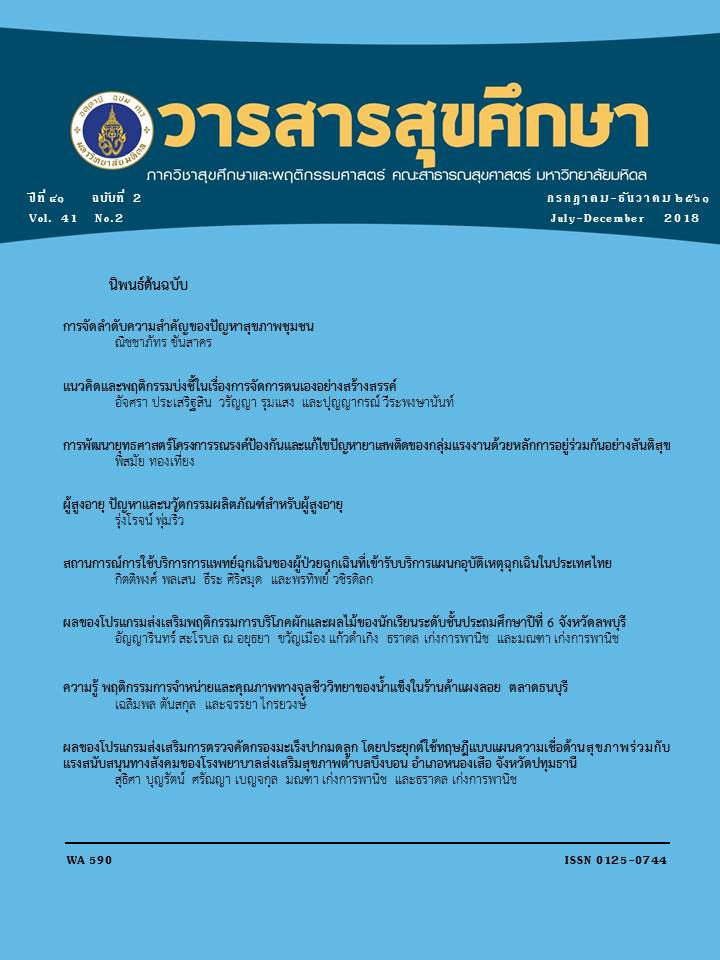 According to the survey of the prevalence of the muscle pain had upper back pain which was ranked third among 10 symptomatic groups, and services at the Outpatient Department with upper back pain of Thai Traditional and Integrated Medicine Hospital in 2015 which was 3 folds of the number of cases in 2014.

This quasi-experimental research was aimed to study the effect of self-efficacy program on self-care behavior using Thai traditional medicine (TTM) in patients with upper back pain. The Samples were composed of 34. The experimental group participated in the health education program for 4 weeks. The comparison group received the Manual on “Self-Care Behavior”, Wilai massage stickTM, and watched video tape while waiting to get services of Hospital. Data were collected by using interview schedule, and data analysis was done by computing frequency, percentage, mean, and standard deviation while hypothesis testing was done by using Wilcoxon Signed Ranks test and Mann-Whitney U test at 95% confidence.

The research results showed that the experimental group after experimentation had significant higher mean scores of perceived self-efficacy (p=0.001) and self-care behaviors (p<0.001). For outcome-expectation, the mean score was higher but there was no significant difference (p=0.400). The comparative analysis of the mean scores between the groups after the experimentation showed that the experimental group had significantly higher than the comparison group in regard to perceived self-efficacy (p<0.001), outcome-expectation (p=0.042), self-massage behavior (p=0.009), hermit exercise behavior (p=0.001), self-massage behavior using Wilai massage stickTM was found to be higher but non-significant difference (p=0.174), and had significant lower pain level than of the comparison group (p<0.001). Thus, the self-efficacy program on self-care behaviors using TTM was effective in changing self-care behaviors, but for self-massage by using Wilai massage stickTM, more time is needed for skills development.