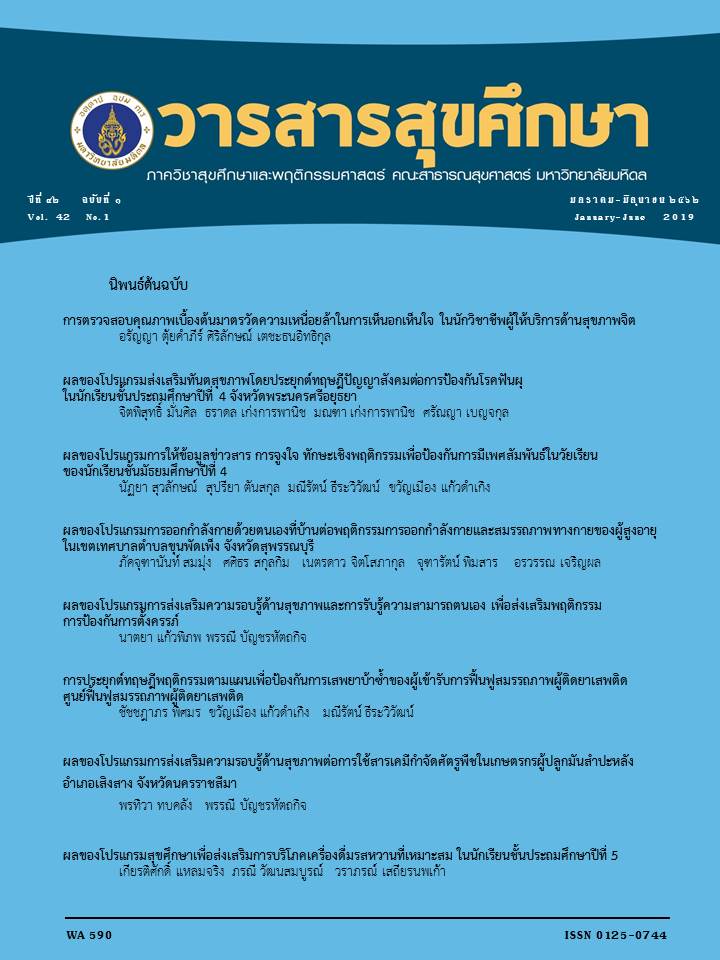 There are two aspects of compassion. One is the sense of satisfaction when
helping others. The other is the sense of experiencing the feeling of the suffering as a function
of exposure to the sufferer which is called compassion fatigue. This article is aimed to develop
a Thai version of Compassion Fatigue Scale for mental health service professions that
developed from the original version by Adams, Boscarino and Figley (2006). The scale has two
subscales which are secondary trauma and burnout. The Compassion Fatigue Scale was
translated into thai version and validated its content by experts in psychology. Then, the Thai
version was tested in 124 mental health service professionals with mean age of 34.46 ± 8.67
years old. Convenience sampling was employed. The scale convergent validity was examined
using the Perceived Stress Scale and the Five Factor Wellness Inventory as a criterion. Data
analysis included descriptive statistics, item objective congruence index, corrected item-total
correlation, Cronbach’s alpha reliability coefficient and Pearson’s correlation coefficient.
According to the experts, the Thai version has acceptable content validity. The scale
demonstrated good internal consistency and reliability with Cronbach’s alpha was 0.93 and
Cronbach’s alpha of the two subscales were 0.82 and 0.91 respectively. The questionnaire
demonstrated satisfying convergent validity as its positive linear relationship with the
Perceived Stress Scale (r between 0.39 and 0.54, p < 0.01) and negative linear relationship with
the Five Factor Wellness Inventory (r = -0.27 and -0.43, p < 0.01). The analysis indicated that
the 20 – items, thai version in mental health services professionals of Compassion Fatigue
Scale demonstrated acceptable validity and good reliability.