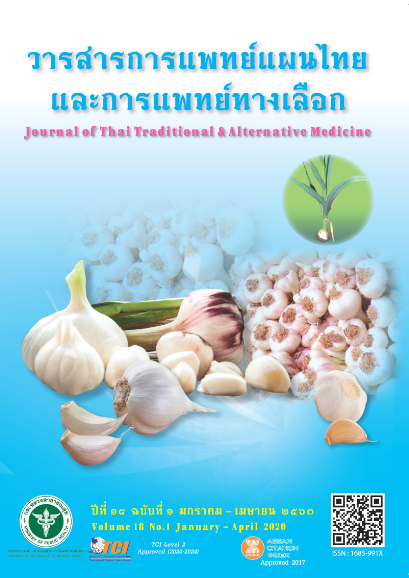 
Nuad Thai (Thai massage) is traditional wisdom of Thailand. There is a written inscription which was declared as a national medicine textbook. Three specific items were selected from the inscription: (1) the Pan nuad khaum in the stone script of the Raja Orasaram Rajaworawihan Temple, (2) the stone script in Phra Chetuphon Wimolmangkalaram Temple (Wat Pho) and (3) the Nuad Thai textbook 1 and 2 in Royal Medicinal book, version Rama V. There is an ancient document about Nuad Thai which Is not yet registered in the National Medicinal book. This study used a version that was edited from the original version. This document is Kawn send seb, Rok ni tan kham chan seb aed. This study was a qualitative research which aims to transform the literature of Nuad Thai knowledge from old language to modern language, and analyze the knowledge for coding and recording the Thai Traditional Digital Knowledge Classification (TTDKC) in the database. The results of the study are as follows:

(1) Nuad Thai Plan in the inscription of the stone script of the Raja Orasaram Rajaworawihan Temple has only one plate, Regarding the point of using massage to cure the symptoms with of 6 diseases, 8 symptoms, 2 lines names and 7 winds. When compared to the inscription stone of the Phra Chetuphon Wimolmangkalaram Temple (Wat Pho), and appears to be a different set of knowledge. (2) the inscription of the Phra Chetuphon Vimolmangkalaram Temple (Wat Pho) is on 60 plates (30 plates showing the front of the body, called “Plan Hngay”, 30 plates and showing the back of the body called “Plan Khaum”). Plates 1-2 show the position and path of the 10 president lines, while  plates 3-60 represent the points and lines used to treat various symptoms, including 301 diseases/symptoms, 75 lines, 257 winds and 84 etiologies. (3) the Textbook of Nuad Thai volumes 1 and 2. There are 2 parts; the description of lines and points of the human body, and 29 images which mention the 105 diseases/symptoms, 53 winds, 201 lines and 4 etiologies. (4) Knowledge of massage appearing in an ancient document (Kawn send seb, Rok ni tan kham chan seb aed), consisting of rhymes and a definite metrical scheme in 196 numbers, with the name of the line, 112 diseases/symptoms, 40 winds in the body, 38 etiologies, massage therapy, drug therapy and magic therapy, with no illustrations. The result from this transformation was coded (TTDKC) and record in Thai Traditional Digital Knowledge Library (TTDKL). In order to protect the prior art of Nuad Thai (Thai massage) in Thailand.