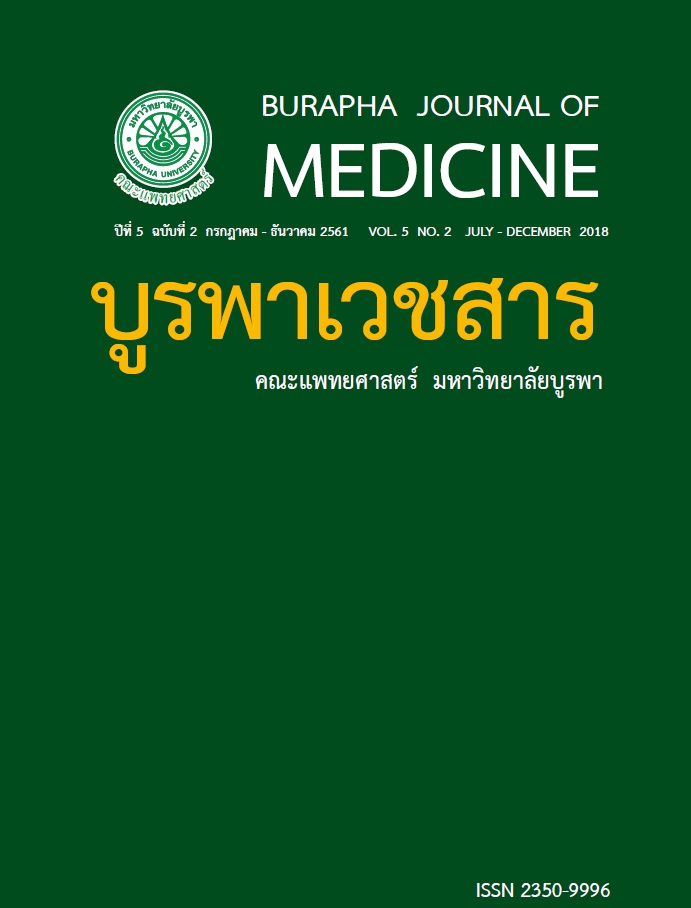 appendicitis, both appendices have inflammation simultaneously. However, if the surgeon
cannot detect the other appendicitis during the first appendectomy, this may lead to serious
consequences to the patient. This is especially the case in Thailand, whereby the typical practice
prefers to take into account the patient’s clinical history and physical examination, rather than
a computed tomography (CT) of the patient’s abdomen for diagnosis of an acute appendicitis,
leading to a misdiagnosis of an acute duplex appendicitis.
A twenty year old Thai female presented with acute abdominal pain starting at the mid
abdomen, which then migrated to the right lower abdomen, was diagnosed with an acute
appendicitis through clinical diagnosis, and underwent an appendectomy at a former hospital.
After surgery her clinical symptoms had not improved. She still had severe right lower abdominal
pain, could not ambulate, could not tolerate eating and could not defecate. The patient also
had increased abdominal distension, causing her to decide to transfer to another hospital. At this
second hospital her physical examination revealed abdominal distension, right lower quadrant
abdominal tenderness as well as rebound tenderness, most likely caused by a localized
peritonitis at the right lower abdomen. The most common complication after appendectomy
is stump leakage (or other associated lesions such as Meckel’s diverticulitis). The patient was
then sent to take a computed tomography of her abdomen, which revealed a blind end tubular
shaped lesion, with internal calcification near the caecum and ileocaecal valve area. It was one
centimeter in diameter, with a diffuse bowel dilatation that had collected fluid.
An emergency laparotomy was done using a low midline incision to inspect the right lower
abdomen. A surgical suture was found intact with no leakage. The second appendix was
identified and found inflamed and ruptured with necrosis along a part of the caecum. The
second appendix was removed along with part of the necrotic caecum. The caecum was
repaired with an end to end anastomosis technique. There was no Meckel’s diverticulum and
no tumors found. The patient had normal ovaries and fallopian tubes. The abdominal wall
was closed with a delayed primary skin suture.

The patient’s abdominal pain significantly improved immediately after the second surgery
and was able to be discharged in post operation day 7 without further complications at the
1st and 3rd month follow ups. The histopathological reports from both hospitals confirmed her
ruptured appendicitis.
Duplex vermiform appendicitis are extremely rare. Misdiagnosis can cause severe complications
or even death. Surgeons who perform appendectomies should always double check other
abnormal lesions during the surgery, such as Meckel’s diverticulum (or in this case duplex
vermiform appendix) to avoid complications from a misdiagnosis.