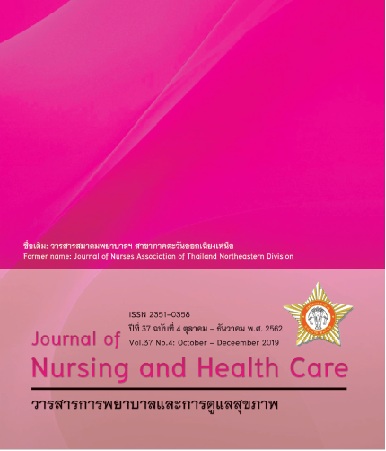 This research aimed to study the maternal perceptions of childhood vaccinations. The research methodology was based on mixed method both of quantitative and qualitative analysis. Quantitative phase recruited in 186 mothers who had children 0-5 years old by questionnaire. Qualitative phase collected in one of head nurse department, one of head pediatric physician and 6 mothers who had children 0-5 years old. The in-depth interviewed were performed at well clinic child center, Banphaeo General Hospital. One of questionnaire was used to collect information by 67 items and in-depth interview were performed to head nurse including head of pediatric physician and mother of children. The reliability of questionnaire, Cronbach’s alpha was 0.93 and two of validities by IOC of in-depth interview questionnaires were 0.80 and 0.90, respectively.

The research findings showed that the majority of mothers had perceptions in responses to susceptibility at moderate level and the majority of mothers had perceptions in responses to severity and perceive childhood illnesses that if children contacted diseases, illness would greatly interfere with children’s daily activities at high level. In addition, the majority of mothers accept that doctors and nurses could help prevent vaccine-preventable illnesses by their advice at the highest level and high level, respectively. The recommendations are proposed to develop an understanding of mothers in childhood vaccination by focusing on service (Plan), various ways of communication (Do), encouraging of childhood vaccination follow up (Check), and preventing childhood illnesses by creating innovation (Act).