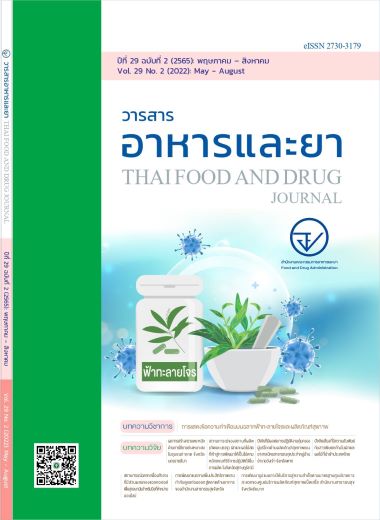 Background: In the aftermath of the COVID-19 pandemic, there was widespread distribution of cleaning and disinfecting products. Some of them were sold online, which may have had labels that met requirement of cosmetic law of Thailand.

Objectives: This study was to explore the situation of alcohol-based cosmetic labels for hand sanitizer that were sold online.

Methods: This was a survey cross-sectional study between April to November 2020. The samples were from alcohol gel based for hand sanitizer containing alcohol, of which 192 products were included in this study. Primary data was collected according to the survey form. The analysis was based on descriptive statistics, frequency, and percentage.

Results: From a survey of sample labels for alcohol-based gel cosmetics for hand sanitiser that sold on the online market, it was found that 65.6 percent of the products conformed to the requirements of the Cosmetics Act B.E. 2558 (2015). There were found to show the names of cosmetics and trade names in Thai language with 81.5 and 89.6% correct, respectively. They also most frequently displayed large letters with 86.0 and 83.4%, respectively. As for the ingredient information, it was found that the sample group had 65.6% correct information on all topics. All products showed 100% information correctly on the category of cosmetics, ingredients, net content, and the invoice number. At the same time, the issues of incorrect ingredient information were found to include the most legal no-warning on the label at 23.9%, followed by no production time, method of use, location of production, month of manufacture, and month and year of expiration at 5.2, 3.2, 3.2, 1.6 and 2.6%, respectively. When considering the details of the major ingredient information in the product, it was found that 100% of the sample group showed detailed information on every legal component. For the details of the text shown on the correct label, it was found that 100% did not display false names/components/ratio/quantities or cosmetic properties, no statement that was made to imply that the material contained in such text, name, image, image, artefact, mark or trademark was infused without the material being mixed in. There were no homophones, homographs, words or statements that convey benefits or qualities, no properties that were exaggerated, and there were no statements that were contrary to Thai culture and morality causing conflicts or negative effects, directly or indirectly, on society, culture, morals, traditions, or behaviours related to sex, language, and violence. Followed by no misleading statements 99.5%, did have alcohol concentration lower than 70% v/v at 75.0%, reduce bacteria accumulation 50.0%, and a message indicating the name of the disease was displayed. The following issues major were encountered: concentration not specified at 25.0%, having labeled reducing bacteria accumulation at 50.0%, and a message indicating disease name at 13.5%.

Conclusions: Cosmetics containing alcohol for hand sanitiser gel form available online in Thailand had followed the regulation by 65.6%, or two -thirds of the survey samples. The major issues that did not comply with the legal requirements were: not specifying alcohol concentration, Thai trade names and Thai cosmetic names were not displayed, and displaying content indicating the name of the disease.