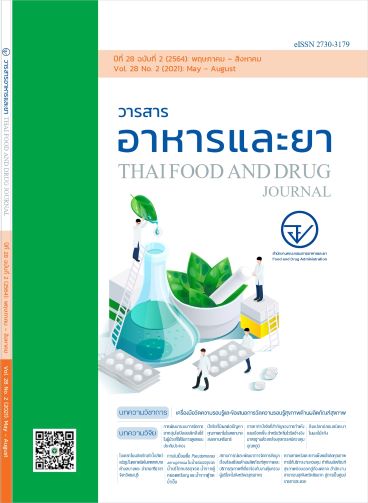 Background: Nowadays, nitrate is a food additive that is used in processed meat products to prevent spoilage, cause desirable color, and odor.

Objectives: The objective of this study was to investigate the contamination of nitrate that exceeding standards in processed meat products.

Methods: The study was collected 135 processed meat product samples that included sausage, sour sausage, and ham in three flea markets in Bang Phra subdistrict municipality, Si Racha District, Chonburi Province, Thailand. The markets supposed namely flea market A, B, and C which distributed in five weeks between November and December in 2019. It collected three samples a week per each market per product type and used the GT-Nitrate test kit that can detect the lowest value at two ppm.

Results: There was 4.4% sample that was not met the nitrate exceeded standard values according to the regulations on the usage of food additives, the notification of Ministry of Public Health number 389 in B.E. 2561 (2018), Re. food additives (number 5) determine to use of nitrates exceed than 500 mg per kg. The four sour sausage products (8.8%) were the highest of nitrate contamination that were not met the standards, also it followed by ham product at two samples (4.44%). In addition, the all flea markets were found that there was the nitrate contamination in products as exceed standard values which explored every week.