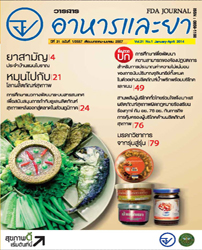 The objective of this study is to prioritize unsafe health products in Saraburi Province.
The issue prioritization is conducted in accordance with the Unsafe Goods Prioritization Manual
issued by Health Consumer Protection Program, Faculty of Pharmaceutical Science, Chulalongkorn
University during January to March 2014. The data was collected from the sources of information,
from the authorities concerned, from group discussions and from the surveys of the distribution
of unsafe health products in communities. The instrument used in the surveys was especially
designed for risk evaluation and risk management. The scoring was done according to the criteria
described in the evaluation form. The criteria was based on the data gained from the surveys
of the distribution of unsafe health products in communities and the data from the study on the
physical affects of those health products to those who consumed or had been exposed to, by
having them report the most severe affects happened to them. For the evaluation forms in
which the data could not be immediately scored, the scorings were decided by majority vote after
the discussions among the stakeholders who participated in the study. The result of the study
indicated that Saraburi’s first five unsafe health products are as follows: 1. Reused vegetable oil
(91.88%) 2. Traditional medicine contaminated with steroid (74.38%) 3. Herbal drinks sold through
exaggerated health claim advertisement (71.25%) 4. Herbs sold through exaggerated health claim
advertisement (63.75%) 5.The unsafe use of insecticides by farmers (63.13%) The issue prioritization
was done based on the evaluation scores gained by the use of the mentioned instrument.
The result of the study has enabled the provincial administrators, the consumer protection
officers, networks as well as the stake holders to realize the priority of the problem of unsafe
health products so as to deal with them accordingly and render strong support and participation
in surveillance on unsafe health products and in entrepreneur unsafe health product awareness
trainings as well as in provincial projects to solve the problems. As an outcome of this study, a
budget for the fiscal year 2014 was allocated to solve the reused vegetable oil problem of
Saraburi province.