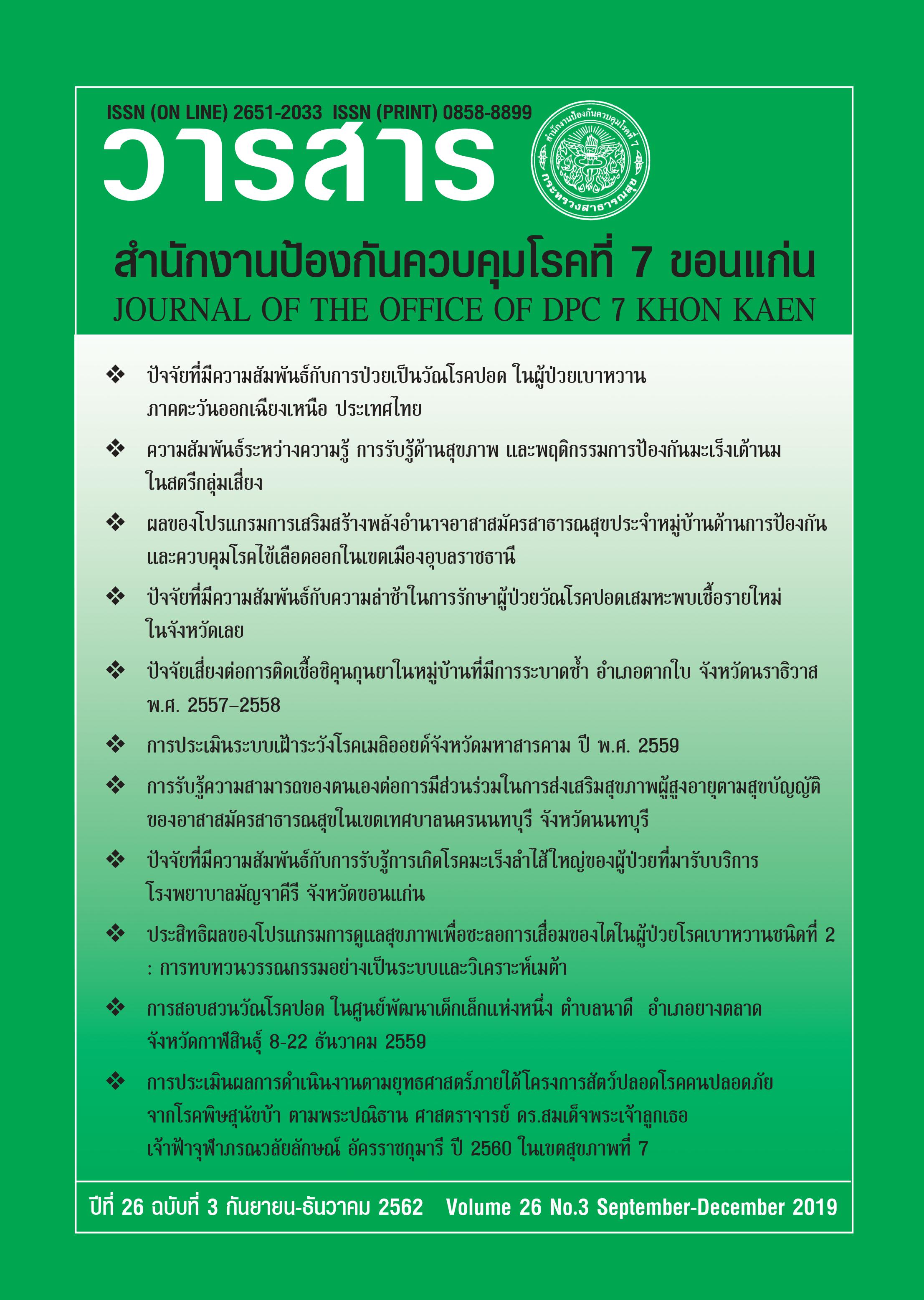 This study aims to evaluate the implementation of the strategy under Saving Animals and Human Lives from Rabies Project, health area 7th in 2017 by 4 elements:  input, process, output and feedback data. The study conducted in the health area 7th, randomized, multi-stage sampling was the first in the district randomly 34 District,  step 2 tambon simple random selection of one district in one district, step 3 village’s randomly selected one village from one tambon and step 4, select the sample households each one.  The sample consisting of (1) 16 administrators (2) 72 Health officers, (3) 38 livestock (4) 72 Local and (5) 510 people. Data were collected using questionnaires, interviews, focus group and related documents. Quantitative data were analyzed using number, percentage, mean, standard deviation.

Strategy 1, for inputs found on the adequacy of budget / personnel / volunteers / and materials were 6.3 %, 4.2%, 6.3%, and 12.5%, respectively.  The process revealed livestock section was operating with a network of 75%. For output found district rendered animal heads rising from 11 (in 2016) increased to 30 (in 2017). People took their pets vaccinated against rabies 48.8%. Strategy 2 found in health area7th has three shelters.  Most of them offered vaccination. Neutering dogs and cats. And a veterinarian who has been trained to take care of. Strategy 3, for inputs found on the adequacy of the statement of personnel, vaccination of 42.7%, 36.1%, 58.3%, respectively. In the process found health officers was integrating with network 65.6%. The data of people rabies exposed was record to (R.36) Program 50%.  Output found, exposed group was found and to be immunized on schedule 86.2%. Strategy 4, for Inputs found on the adequacy of budget / personnel / publications 56.5%, 18.5%, 32.6% respectively. Process to find local records, registration of dogs and cats in Thai Rabies Net 27.8 %. Output found 58.2% of the dog and cat was surveyed and registered by a local.  The Municipal law to regulate animal feed and discharge of 22.3 % and 46.7 % support the purchase of vaccines.  Strategy 5, input found public relation were used to promote education about rabies 25 %.  The adequacy of the statement /Staff / Media found 0%, 100%, 75.0% respectively. For process, All provinces was coordinated and comprehensive geospatial information production target.  Output found every province had prepared a press release, as well as spot news are disseminated through community radio and TV in province.  Strategy 6 found no integration with existing databases relevant agencies to provide a single database. However, all departments are sharing information. Reflection Data The research team has concluded the assessment and reflection, those involved have been known to lead to the next revision.

The recommendations from this study. Department of Local Administration Should plan for the purchase of vaccines, including rabies in the country. To reserve a vaccine to be 10-20 percent is not enough to solve the vaccine. And set standards and regulations for all local authorities to apply the rules and practices of the municipal law in relation to practice in the same direction addition, the Ministry of Agriculture should push for compensation to volunteers livestock. In area because there are a lot of missions.   Lack of motivation to make and the change people often