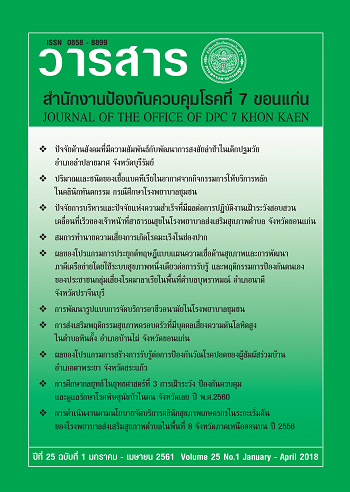 This research was a quasi-experimental research with the objective to study the result of application health
belief model and network association development program using the one health system for perception and
behavior of the people at risk to Malaria disease in Bupram sub-district, Nadi district, Prachinburi province. Thesamples were drawn by simple sampling from the population at risk of Malaria disease. The sample groupwas divided into an experimental group and a controlled group, each of which consisted of 48 samples.
The experimental group participated in the activities to change their behavior consisting of appointing the
committee to perform one health operation, providing knowledge Health Belief Model and holding group
activities to exchange knowledge, following up and giving advice by One Health Network Association team, whichlasted 12 weeks. Data was collected before and after the experiment by using the questionnaires. Then, the datawas analyzed with frequency, percentage, mean, standard deviation, Paired t-test and Independent t-test wereused to test the hypotheses.The fndings revealed that after the experiment, the experimental group obtained the scores for perceptionof Malaria disease occurrence, severity of the disease, benefts from preventing themselves from the disease,obstacles from preventing themselves from the disease, and preventive behaviors for Malaria disease higher than prior to the experiment and the controlled group at the signifcance statistic level of (p-value<0.05).The factors of success for this program were a result from the integration of potential improvement for the network association by using one health system and participation of the association to promote the disease prevention operation in the area in order to generate perception and understanding which would lead to behavior change and continuous follow-up of the operation in the area.