Association between parental, peer, and teacher attachment, and cyberbullying

Objective: To study association between parent, peer, and teacher attachment, and cyberbullying.

Method: This is a cross–sectional descriptive research in 1,144 Mattayomsuksa 1–3 students in Bangkok. The research tools were personal information questionnaires, cyberbullying questionnaires, and attachment to parents, peers (inventory of parental attachment and peer attachment-Revised; IPPA-R) and teachers questionnaires (Inventory of teacher-student relationships; IT-SR). Descriptive statistics were used to find frequency, percent, and mean. Analytic statistics such as chi-square, anova, and multinomial logistic regression were employed to find the association.

Conclusion: According to the study, parents and teachers should be encouraged to establish good relationships with children through communication, build trust, and reduce alienation. In addition, building good social skill in children is important to make them have good relationship with friends and prevent cyberbullying. 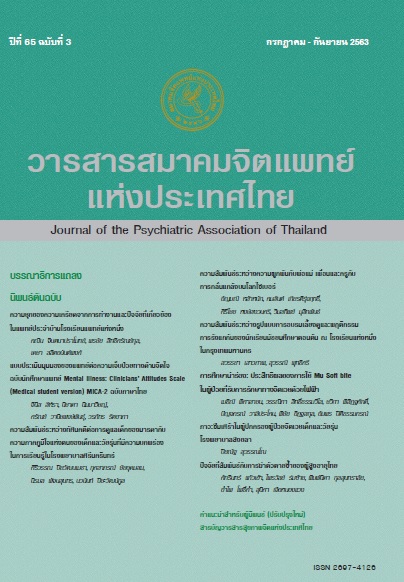 Copyright (c) 2021 Journal of the Psychiatric Association of Thailand