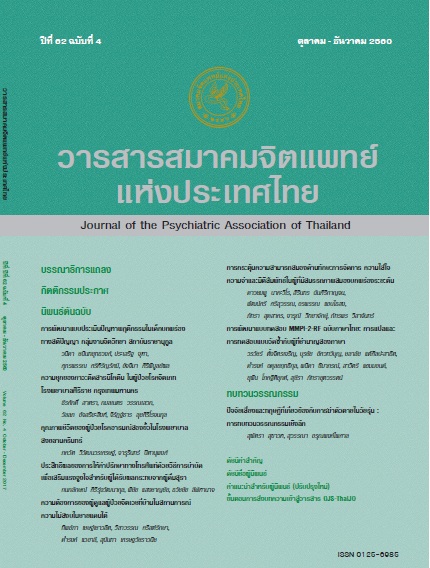 Objective : To compare the psychiatric diagnosis and the factors associated between
group of persons with committed suicide and comtrol group.
Method : This study was a case-control study. The medical records of persons
who committed suicide in Muang district, Lampang Province from October, 2010 to
September, 2013 were reviewed and conducted psychological autopsies with relatives
to make the psychiatric diagnosis and identify the factors associated with their suicide.
A control group was selected by random sampling from the neighborhood of the cases,
who having the same sex, no more than 2 years’ difference in age, and living not more
than 100 metres from the house of the deceased person. Fisher’s exact test was used
for data analysis.
Results : Among 77 persons with committed suicide, The most common method of
suicede was hanging (70.12%). The second method was taken insecticide. Make
gender was predominant, aged range 25 to 60 years, be received income farmer or
an employee, with educational achievement as primary school, received income less
than 5,000 Baht per month and be married. There were more psychiatric diagnoses and
social factors in cases than controls statistical significantly. The psychiatric illnesses
were adjustment disorder, substance use and related disorder, depressive disorder,
and psychosis, respectively.
Conclusion : A psychiatric illness and social isolation were the factors associaled with
committed suicide. Health care providers should screen and early management in
patients psychiatric illness with social isolation, to prevent suicide.